The cuisine of the Langa highlands

The highlands of the Langa are the custodians of the soul of legendary hills which are today a World Cultural Heritage site. Refuge is found here for the truest values of ”albesità” – the characteristics that make the Alba area and its people so special -, which elsewhere are dazzled by the limelight. The ancestral wisdom that is catered for in the culture of the culinary tradition. Because up here the table is the altar to Mother Langa: the obligatory step to understanding the genius loci of a land elected to legend of taste, the cradle and depository of centuries-old knowhow and empathy for the land. This means the quest for the spirit of the cuisine of the highlands is also a cultural journey through literary references and echoes: from Pavese to Fenoglio and Monti. A journey amidst the colours and aromas of a landscape that today is evolving rapidly under the impetus of climate change and new economic stimuli: hazelnuts of course, but also the vine, lavender, Einkorn wheat, and even the archaic greenery of pastures and woodland.

The cuisine – or rather food culture – of the upper Langa is imbued with absoluteness and sacred intensity, because it is aware of the not so distant times of the misery known locally as the malora. Emerging through the knowledge and sensitivity which are the secret legacy of every dynasty of hosts are the characteristics that identify a culinary style which is truly “made in Alta Langa”. As in the most authentic country traditions, diners are welcomed to the table by raw and cooked salami (salame crudo and salame cotto). Anchovies in green sauce – acciughe al verde – or decorated with curls of butter hark back to the salt ways of ancient times that brought Ligurian influences. The rudimentary carne cruda beef tartare takes pride in its identifying content. Vitello tonnato maintains the original aura of a festive dish with its slices of cold veal in a tuna mayo sauce. Marinated carpione in summer shows off the best of home cooking, while occasions to be remembered are marked by the glorious fritto misto in a mixed fry-up of sweet and savoury delicacies. Home-made pasta is a must: from tajarìn to ravioli del plìn, the lele of Castellino Tanaro and the friciule ai gonfiotti fritters of Paroldo. The herbs for the sauces and fillings are a mysterious skill, and the natural quality of the vegetable garden leaves its mark on seasonal dishes, finding its apotheosis in the symphony of colours and flavours produced in insalata russa, or Russian salad. Alba White Truffle adds the finishing touch to autumnal cuisine, but scope and attention are also given to black truffle. Chicken and rabbit continue to stand out among the mains, while hare and wild boar are a timeless pairing with polenta. The toma and robiola cheeses of Murazzano, Bosia and Roccaverano embody culture all on their own. Bonét chocolate and amaretto pudding is sure to be on the menu, while hazelnut cake brings pride in identity to the table. Dolcetto – at times a “house wine” – takes its place alongside the refined perlage of Alta Langa, the winemaking pride and joy of all the hills of this corner of Piedmont. 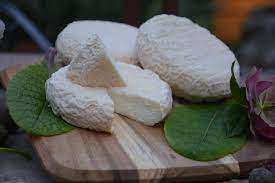 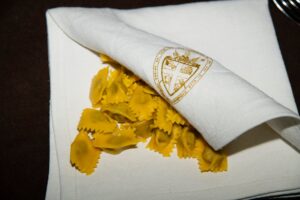 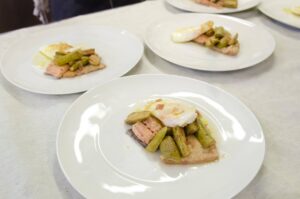 Everywhere you go, a solid, coherent cuisine: genuine, judicious and lovely to look at, soft and generous. Age-old and utterly modern, epitomized by the potagé stove and the fireplace. The “schéira” (dry weather) and “marìn” (the wind that arrives from the sea) are among the ingredients in kneading, rolling out and cutting the pasta. Or seasoning the salami. A cuisine capable of keeping up with the times without losing its epic inspiration. Sotto voce, with no need to boast, just the authority that comes from the knowledge of being part of a land that is blessed.

A cuisine that reflects the values of the hills of the highlands. Work is everything, but feasting is a duty towards the community. Saving is a philosophy of life, but generosity is an imperative when it comes to the table, and money is for speculating and gambling. Encapsulated in this treasure chest of values that have enabled redemption from the malora, elevating the highlands of the Langa to model of tourist hospitality, is the certainty of a bright future for the civilization of the erca (the kneading trough) and tajarìn.