The 299th Chapter of Spring in Langa took place on Sunday 20 March in the Hall of the Masks of the Castle of Grinzane Cavour, under the guidance of the newly elected Grand Master Tomaso Zanoletti. 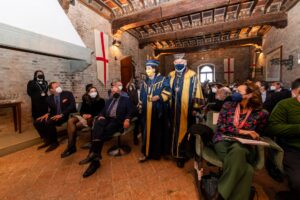 Zanoletti entered the room accompanied by Bianca Vetrino who, after 10 years at the helm of the Association founded in 1967, officially passed the baton.

“The Order has experienced a true renaissance in the last twenty years thanks to those who preceded me, with the revival sought in the early 2000s with Alfredo Boratto and then in particular under the polite guidance of Bianca Vetrino whom I thank – said the Grand Master next to Master Vetrino, who remains member of the Ruling Council–. Born in an era when restaurants were few, cuisine considered as a service and tourists in the Langa very rare, the Order was an intuition of Luciano Degiacomi who, with foresight, chose the path of brotherhoods inspired by Burgundy, giving life to an association endowed with an effective and modern capacity for action. In the meantime, the territory has had a progressive growth until the real boom arrived with the Unesco recognition of the Langhe and Roero hills. This was also the case in our Order, both in the number of adhesions, which more than doubled thanks to the birth of Delegations throughout Italy and abroad, and in the ability to enhance culture and cultivate relationships. It is with this awareness that today I face this new task with commitment, because I know the importance that the Order has had in the past and I am convinced that its aims are not only still current, but particularly useful in this time, both individually, both in collaboration with the institutions and other realities of the territory “.

After the inauguration speech, the cultural moment of the Chapter had as protagonists the journalist and Knight Paolo Marchi with the journalist Cinzia Benzi engaged in a dialogue on the theme “Wine: plural feminine” with the preview presentation of the new project of the Identità Golose magazine: “Bubbles in the World“. 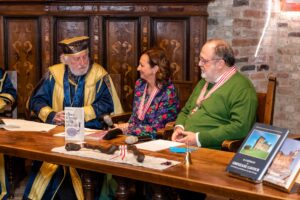 The Chapter of the Spring in Langa gathered over 60 Knights in the manor, symbol of Unesco and headquarter of the Order. During the meeting 9 new Knights were inducted, including the young producer Federica Boffa who today leads the historic Pio Cesare cellars in Alba and the entrepreneur Marco Stroppiana, owner with his family of the Mondo di Grinzane Cavour group.

The ceremony, which began with the show of flag wavers and musicians from Alba, ended with a four-handed lunch in the Cavour room prepared by the chefs Marc Lanteri, landlord, and Carlo Zarri of the Villa San Carlo restaurant in Cortemilia. 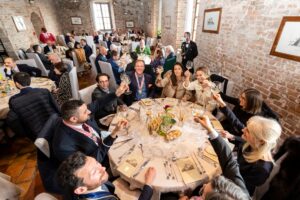 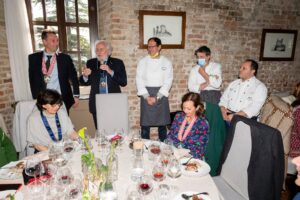 “We propose to the Institutions to nominate the territory of Alba and Bra as the Italian Capital of Culture 2026. After recognition as a UNESCO World Heritage Site and that of Alba Capital of Corporate Culture, we believe that the time is ripe to continue the process of enhancing our excellence and achieve a further goal “.

This website uses cookies to improve your experience while browsing the website. Of these, cookies classified as necessary are stored on your browser as they are essential for the basic functionality of the website to work. We also use third party cookies that help us analyze and understand how you use this website. These cookies will be stored in your browser only with your consent. You also have the option to disable these cookies. However, disabling some of these cookies may affect your browsing experience.
Necessary Always Enabled
Necessary cookies are absolutely essential for the website to function properly. These cookies ensure basic functionalities and security features of the website, anonymously.
Advertisement
Advertisement cookies are used to provide visitors with relevant ads and marketing campaigns. These cookies track visitors across websites and collect information to provide customized ads.
Analytics
Analytical cookies are used to understand how visitors interact with the website. These cookies help provide information on metrics the number of visitors, bounce rate, traffic source, etc.
Functional
Functional cookies help to perform certain functionalities like sharing the content of the website on social media platforms, collect feedbacks, and other third-party features.
Others
Other uncategorized cookies are those that are being analyzed and have not been classified into a category as yet.
Performance
Performance cookies are used to understand and analyze the key performance indexes of the website which helps in delivering a better user experience for the visitors.
Save & Accept