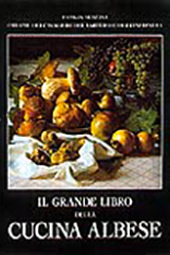 Following on from the success of Nonna Genia (1982), this weight volume on the food of the Langa was the result of a new collaboration with Famija Albeisa. Grand Master Beppe Colla and the President of Famija Albeisa, Giovanni Bressano, joined forces to produce an almost encyclopaedic work, with contributions from a number of local scholars and an accurate, authoritative introduction by Silvano Serventi, a Parisian researcher and writer of Italian descent. The book follows two basic avenues encompassing written and iconographic records. It opens with a series of monographs on “Food and its conditioning factors”, from Armando Monte’s “A rescued cuisine”, to Giacomo Giamello’s “Is cooking medicine?” and Luciano Cordero’s “Food and religion”. A treatise by Giancarlo Ricatto on the “Fundamental Elements” – the ingredients, ranging from truffles to salt – follows, while the Piedmontese breed of beef is covered by Milo ]ulini. The third chapter, written by Federico Veglio, is dedicated to “Wild herbs in the traditional cooking of the Langa and Roero”. The central part of the book then concentrates on actual cooking, with a fitting title: “The pathway to recipes”. Here Giancarlo Ricatto sits us down at the tables of the common people, the bourgeoisie and the noble classes in Alba and the Langhe. Taking a main ingredient (which could be game, flour or vegetables) as a starting point, he traces back its social history and life as a product before introducing a recipe – or recipes, all with the name of their sources  – as the essential conclusion of a cultural-gastronomic journey. The 240 recipes in the book are also reproduced in a small separate volume which is easy to consult in the kitchen. The history of the vine and wine in the Alba area up to the present day is then outlined by Giovanni Minetti with the collaboration of Armando Cordero, while the last fifty pages of the book are dedicated to Armando Gambera’s take on “The Cuisine of Alba in the 20th century” through” History, traditions, stories”, as is stated in its subtitle. Unforgettable accounts of Giacomo Morra’s Savona Hotel re-emerge, along with long-forgotten stories about the Due Buoi Rossi, the Coppa and the Antico Giardino. And then Vigin ‘d Modest of Alba, and the restaurants of La Morra: Maria Sandrone’s Angelo and Settimio Roggero’s Belvedere. The narrative then reaches the present day, carrying the many interviews that the author, together with Nando Vioglio, recorded with chefs of today. The second section records the photographic evidence, with Enrico Necade – a neorealist-cum-renaissance artist – handing down to posterity pictures of dishes and of landscapes linked to them by a fil rouge revealed by Arturo Buccolo in concise, yet enlightening comments. Which brings us to the final name to add to the list: Paola Barberis, who produced the dishes using the recipes so they could be photographed by her husband.