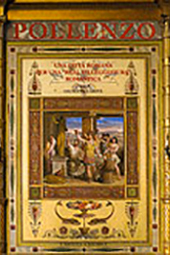 An account of the series of singular events which began with the idea to breathe life back into a major 19th-century complex of buildings: King Charles Albert’s estate in Pollenzo. Besides putting a stop to the process of decay of some of the oldest architectural structures on the estate, the Agency restoration project – which began in 1999 – led to the reclaiming of thewhat was once a Roman settlement and its surrounding area. This book therefore represents a precise record of what has taken place over recent years, in the light of two thousand years of history. Entrepreneurial initiatives and study in the fields of history, art, economy, archaeology, town planning, agriculture, wine-growing and architecture have made it possible for the reader to appreciate the exceptional political and territorial significance of this hub in different eras from Roman times through to the Middle Ages. Though the importance of Pollentia – particularly towards the end of the Roman imperial period – was essentially well-known, the new research into mediaeval archaeology and exceptional finds in the area have revealed a previously unsuspected Late Antiquity era Pollenzo. And the same goes for the Renaissance period, when the previously unexplored architectural and decorative features of the castle made this residence of Counts one of the hearts in Southern Piedmont of the artistic revival resulting from the creation of Emmanuel Philibert’s new State of Savoy following the French occupation. The area subsequently underwent development in the first half of the 19th century under Charles Albert of Savoy, who chose Pollenzo as a haven of relaxation, as well as a centre of excellence for his experiments in the fields of agriculture, animal husbandry and winegrowing. And this pursuit of prestige has now been taken as a model for the setting up of the Wine Bank and the University of Food Sciences, alongside top quality restaurants and other ventures in the field of hospitality with a view to harnessing local entrepreneurial talent in following a great tradition.